The Philippines' HCP market recorded a 9.8% year-on-year and 5.2% quarter-on-quarter growth in 1Q22, according to IDC.

This is after the market contracted in 4Q21 due to global shortage of raw materials and demand slow down with spending decline as the year ends. The start of the year showed a good improvement with demand across all segments seen to recover despite all the challenges in the supply. 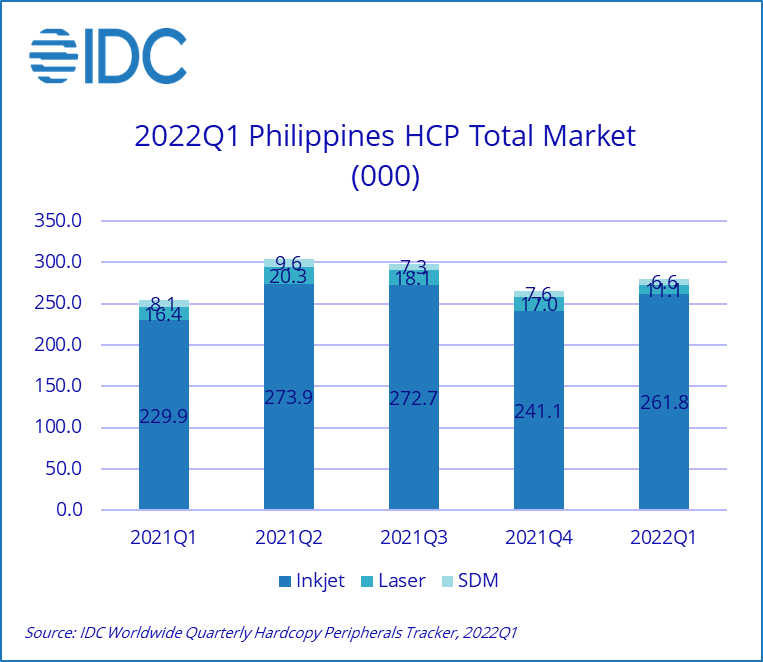 The overall growth in 1Q22 was mostly driven by inkjet printers with 13.9% growth year-on-year. Most inkjet brands were able to secure good allocation despite the ongoing stock issues while the market continues to benefit from consumer demand and recovery of smaller and medium businesses.

Laser market including copiers has not been exempted from the shortages resulting in significant drop of -32.2% year-on-year. With the economy opening further, opportunities have seen to come up which includes renewals and new requirements. The unavailability of stocks also became a challenge for most brands to maximize these opportunities. Overall, the demand continues to improve with most industries started to return to offices even in hybrid setup.

“The start of the year for the overall HCP market appeared to be promising despite the surge of COVID-19 cases due to the Omicron variant. It did not seem to affect the overall demand, but it affected the stocks, not just in the Philippines but also in the other countries. No brand is exempted, and we did see fair share of shortages across the board. They became more resourceful in their allocations and offerings to make sure that all demands are met without compromising specific segments or industries,” says Lilibeth Agudo, IPDS Market Analyst at IDC Philippines. 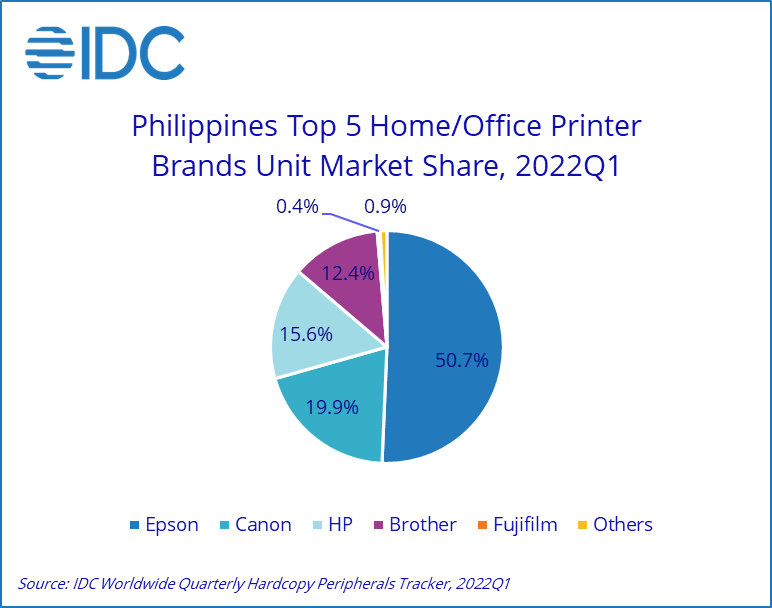 Epson remains to be the market leader in the overall home/office printer market for 1Q22 holding 50.7% market share, despite showing a decline of -1.8% year-on-year. They continue to face stock challenges which affected both their ink cartridge and ink tank line ups. There has been a significant drop in their WorkForce series models and their L-series models remain to hold the biggest share in their inkjet SKUs. Overall, Epson continues to face stock constraints due to global shortage on chips but the demand from retail/consumer remains strong with ongoing recovery from small and medium businesses.

Canon maintain its second spot with 19.9% of share, registering a significant year-on-year growth of 53.9%. Mostly driven by their inkjet products, which showed the highest annual growth at 61.5%. In the previous quarters, Canon’s inkjet allocation has been very minimal which resulted to a lot of back orders from their partners. In 1Q22, Canon was able to secure more allocation which helped them fulfill few of their pending orders which were mostly targeted towards retail and consumer demand. The laser market, in contrast have seen to be more affected of the global shortage, specifically their laser printer machines. There has been a huge decline coming from mid to high segment and stocks were more on the low segment which they also position on retail. Copier market showed a slight increase because of a couple of projects won for commercial segment.

HP kept the third position with 15.6% of share but continues to record a significant growth at 27.7% year-on-year. The consistent growth of their inkjet printer products due to better acceptance in the market and good allocation contributed to the 35.8% annual growth. HP also been consistently seeing good performance in their ink tank models which they continue to promote not just for consumers but also for commercial segments, especially smaller businesses. Copier market is recovering well as opportunities started to come in from both government and commercial accounts after quarters of less demand. Printer-based on the other hand, despite being more affected by the stock constraints, have seen good opportunities from government and corporate segments as continue to improve as more offices reopen even with hybrid setup. This is a combination of renewals, additional, and new requirements.

“The situation this year is very much different compared to two years ago when the country was first hit by the pandemic. Given that we are already seeing improvements in demand across all segments, the overall HCP market remains to be optimistic with the economy reopening at 100% and the COVID-19 situation seen to be more manageable with the increase of vaccination rate. However, it should be noted that the global shortage of microchips and semiconductors expected to continue for the rest of the year and surge of cases in different countries where supplies are being sourced out might happen from time to time. This shortage in supply will affect the demand rate in parallel,” said Agudo.